This Spring, We All Drove Much Less. Yet Traffic Deaths Went Up. Why?

This Spring, We All Drove Much Less. Yet Traffic Deaths Went Up. Why? 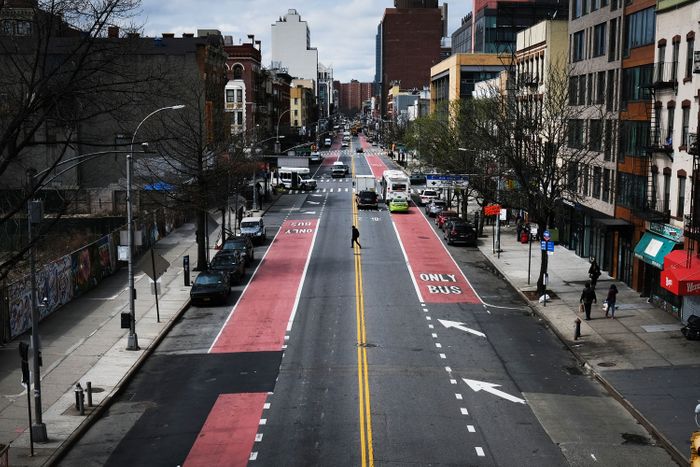 Empty streets. Empty highways. Empty parking lots. Normally bustling transportation corridors with few cars on the road have become the most indelible images of the novel coronavirus pandemic. Yet new data released by the National Highway Traffic Safety Administration for the first half of 2020 — when much of the U.S. population was under stay-at-home orders — show that the rate of traffic deaths per mile driven went up, not down. How is that possible?

Americans drove less — a lot less — in the first six months of 2020. The number of vehicle miles traveled by drivers fell by 16.6 percent. In New York, the drop was far more pronounced. According to a report on transportation patterns during the coronavirus response by NYU’s Rudin Center for Transportation and Sam Schwartz Engineering, New York City drivers were traveling 93 percent less in April 2020 compared to January 2020, By June, traffic volume was back around 70 to 80 percent of normal.

Driving less did mean a decrease in the overall number of people killed in crashes nationwide. There were 302 fewer fatalities during that same period, April through June, in 2020 than in 2019. However, because overall traffic volume decreased so much compared to the previous year, the traffic fatality rate — calculated as the number of fatalities per 100 million vehicle miles driven — increased from 1.06 in the first half of 2019 to 1.25 in the first half of 2020. That rate — fatal crashes per mile driven — hasn’t been that high for more than a decade. If you look at just the second quarter, April to June, the rate is even higher, at 1.42.

So what was happening? The biggest factor, NHTSA’s report suggests, may be twofold: the type of driver who was still out making trips during the pandemic despite stay-at-home orders and the driving behavior that the empty streets allowed. “People who are less risk-averse,” reads the report, “may have engaged in their usual driving routine and habits or additional discretionary trips — or reduced their usual driving by less — while more risk-averse people remained home and off the roads, or restricted their out-of-home activities and driving by a greater degree.” The combination of risky drivers plus near-empty streets also resulted in faster driving, which, in turn, made streets more deadly. “Faster travel, whether or not actually exceeding the speed limit, increases the chance of fatalities in a crash,” the report says. And drivers were more likely to engage in other risky behaviors as well. Data collected from trauma centers show an increase in drug and alcohol use by drivers and a decrease in seat-belt use for all vehicle occupants, determined by the number of people who were ejected from crashes.

Back in New York, the extreme decrease in vehicle miles traveled did lead to a dramatic but temporary drop in the number of fatalities. During March and April 2020, vehicle crashes dropped to one-quarter of 2019 levels, with pedestrian injuries reduced by 80 percent. But those empty streets eventually gave way to risky behavior in New York City as well: As vehicular trips decreased by up to 84 percent, traffic speeds rose 27 percent. The pandemic may have led to gridlock-free rush hours, but it also meant more drivers treating uncrowded avenues more like the BQE. In spring, the number of speeding tickets issued doubled. Now the number of traffic deaths is on track to be higher than any year since 2014. (One bit of good news is that pedestrian deaths are finally going down again, for the first time in decades.)

The NYU report makes recommendations to reduce crashes, some of which have already happened in limited ways as a response to the pandemic: closing or narrowing streets, widening sidewalks and expanding pedestrian zones, and installing infrastructure for bike or scooter riders to separate their travel from cars. While a lot of this has been done in a limited way, mostly to support outdoor dining, bigger and more permanent transformations still need to be made on New York’s wider main streets, as a September letter from advocates argued, including giving walkers and bikers better protection from cars. Cycling is way up, yet seven people were killed while riding bikes in September, the highest number in a single month for the past six years.

On top of all that is another transportation paradox: Congestion has returned, even though only 10 percent of workers have returned to Manhattan office spaces. “New Yorkers are no longer defined by the 1950s-era commute,” explains Sarah Kaufman, associate director of the NYU Rudin Center for Transportation and co-author of the report. “We make multiple, short trips throughout the day … In normal times, city residents take advantage of multiple modes for those trips: subways, bikes, buses, taxis,” she says. “But now that people assume cars are safer in the pandemic, they’re opting for driving — and likely for every trip. These micro-trips add up to citywide congestion.”

But only New Yorkers with access to vehicles have the luxury of making that choice, which calls for a greater shift in the way cities design streets as commuting patterns change, says Charles T. Brown, a researcher and adjunct professor at the Alan M. Voorhees Transportation Center at Rutgers University. “We must design our roadways with the locals in mind,” he says. “We know that disproportionately those who are killed in these sorts of vehicle-pedestrian crashes are Black, brown, and low-income communities, and these are the same people who are heavily dependent on alternative modes of transport. That’s where we need to make the investments.”

In New York, like most large U.S. cities, these newly formed habits have created a new safety conundrum. Although car travel has rebounded, the rate of bus and subway travel continues to lag, both because there are fewer commuters and because of the perceived risk of contracting COVID-19 on mass transit (when, in fact, the risk is low). As an American Public Transportation Association study shows, one of the best ways to reduce traffic deaths is increasing the per capita rate of public-transit ridership. Sustained investment, including an enormous influx of federal dollars, to make transit safe, reliable, and affordable would be one of the best investments to decrease the dangers New Yorkers face while getting around their city — whether it is from coronavirus or cars.

STAY HERE  8:30 A.M.
12 (Vetted) Tree Houses to Rent, From Silicon Valley to Woodstock We’ve combed through hundreds of listings and vacation-rental reviews to find the best tree houses for rent in the U.S.
VIRAL HOUSES  YESTERDAY AT 4:29 P.M.
Meet the Couple Who Bought the Brutalist Bachelor Pad You Saw on Twitter People went wild for the house online, but these people actually plan to live in it.
LISTINGS EDIT  YESTERDAY AT 2:20 P.M.
We Unearthed the 60 Best Rent Deals in NYC Right Now A Bed-Stuy apartment with a private 50-foot-deep garden, a large studio with tons of built-ins on the Lower East Side, and more.
STRATEGIST INVESTIGATES  YESTERDAY AT 1:18 P.M.
The Pandemic Pet Is a Snail They’re suddenly everywhere: sliding on models’ backs to promote Sophie Buhai’s latest jewelry collection and on the artist Chloe Wise’s finger.
STREETS  YESTERDAY AT 8:30 A.M.
This Spring, We All Drove Much Less. Yet Traffic Deaths Went Up. Why? The lure of the open street.
LOOK BOOK  YESTERDAY AT 8:00 A.M.
The Look Book Goes to a Bed-Stuy Stoop Sale Organized by a fashion editor and a photographer, a sale where passersby picked up a snakeskin hat, white leather bell-bottoms, and a pink kimono.
STREET VIEW  YESTERDAY AT 8:00 A.M.
The Next Mayor’s Next City Bill de Blasio’s successor will get the chance to make New York life easier, nicer, and fairer — or just keep us going the way we were before.
By Justin Davidson
UNDER A MILLION  10/14/2020 AT 4:10 P.M.
A $395K Studio on Central Park West and a (Newly Discounted) Clinton Hill Co-op Plus, actually spacious two-bedrooms in Jackson Heights, Carroll Gardens, and more.
ENCOUNTER  10/14/2020 AT 1:03 P.M.
Theo Henderson Influences L.A. City Policy. For 7 Years, He’s Lived in the Park. His podcast, We the Unhoused, is made from wherever he can charge up his phone.
THE NUMBERS  10/14/2020 AT 12:57 P.M.
Everything You Need to Know About NYC’s Housing Market The COVID-19 pandemic turned New York’s housing market on its head, creating sometimes conflicting trends that house hunters need to be familiar with.
A TRULY TERRIFIC NEW YORK LISTING  10/14/2020 AT 12:00 P.M.
Still Closer Than Maplewood: A Deeply Renovated Carriage House in Maspeth Its laundry room is so large it feels practically suburban.
RANKINGS  10/14/2020 AT 11:00 A.M.
How 50 New York Buildings Scored on Their Energy-Efficiency Report Cards And, yes, they will have to post them in their lobbies.
NEIGHBORHOODS  10/14/2020 AT 8:00 A.M.
When NIMBY Met MAGA on the Upper West Side A group of liberal residents wanted to oust hundreds of homeless men from a local hotel. Then Tucker Carlson took up their cause.
By Miriam Elder
GREAT ROOMS  10/13/2020 AT 1:44 P.M.
A Studio Visit With Nest Founder Turned Painter Joseph Holtzman He paints on marble, and the sofa is from 1918.
DESIGN HUNTING  10/13/2020 AT 11:27 A.M.
When Nest Was What’s Next Looking back at the fearlessly eccentric magazine that Condé Nast was too afraid to buy.
By Wendy Goodman
PUBLIC ART WATCH  10/13/2020 AT 9:00 A.M.
The Ooh-La-La Fake Feminism of That Big Naked Medusa Statue By the Courthouses It’ll certainly co-star in endless selfies.
FROM THE EDITORS  10/13/2020 AT 9:00 A.M.
Curbed Is Now at Home at ‘New York’ We can’t imagine a better fit.
LOOKING  10/13/2020 AT 9:00 A.M.
Curb Your Dog! Save the Tomatoes! New Yorkers make the most out of sidewalk green spaces by planting everything from formal hedges to vegetable gardens.
THE ESTABLISHMENT  10/13/2020 AT 9:00 A.M.
The Panic Attack of New York’s Power Brokers The city’s “permanent government” has always built its way out of crisis. But what if it can’t?
By Andrew Rice
PROBLEM SOLVING  10/12/2020 AT 6:09 P.M.
Renegotiating Your Rent (Or Finding a Better Deal) Tips from experts and tenants on how to upgrade or renegotiate the terms of your lease.
MORE STORIES

Search the full MLS and Exclusive Property Listings.
(Prices and inventory current as of March 4, 2021)